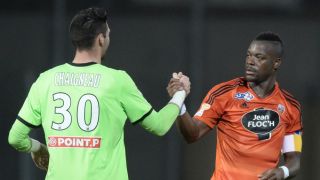 Sunderland have confirmed the signing of defender Lamine Kone from Lorient on a four-and-a-half-year deal.

The Ivorian defender, 26, has been the subject of interest from Sunderland for a number of weeks with talks reported to have twice stalled before being resurrected and finalised on Wednesday.

Kone joins Jan Kirchhoff, Dame N'Doye and Steven Harper in arriving at the Stadium of Light this month as manager Sam Allardyce seeks to guide 19th-placed Sunderland away from danger.

"Strengthening our defensive options was a priority for us and Lamine is a player that has impressed me when I've seen him play," Allardyce told Sunderland's official website.

"He is big and strong, attributes you need to play in central defence in the Premier League, and his arrival will give us healthy competition for places in a key position."

Kone, who represented France at youth level prior to becoming a full Ivory Coast international, came through the academy at Chateauroux and moved to Lorient in 2010.

Earlier on Wednesday, Sunderland allowed Greek winger Charis Mavrias to join 2. Bundesliga side Fortuna Dusseldorf on loan for the remainder of the season.