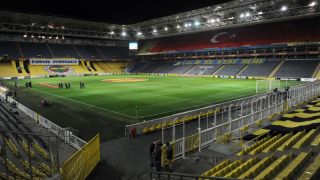 Fenerbahce's party was travelling back from their game in Rize when several shots were fired at the front of their coach.

The driver was taken to hospital with facial injuries, although Fenerbahce's players were said to be unhurt in the incident.

Fener condemned the attack and called for the league to be suspended and on Monday, the Turkish Football Federation confirmed that the competition will be halted for a week, while scheduled cup quarter-finals have also been postponed.

Reigning champions Fener are two points behind leaders Galatasaray, who won 4-2 at home to Karabukspor thanks in part to two goals from Wesley Sneijder.

Besiktas are a point further behind in third, after they were held 0-0 at home by Istanbul Basaksehir.

That stalemate was the exception in round 26, with 34 goals scored across the nine matches, as Genclerbirligi, Bursaspor and Akhisar Belediyespor all recorded heavy wins.

Moestafa El Kabir netted a hat-trick in Genclerbirligi's 5-2 thrashing of Kasimpasa, while Bursaspor were thankful for Fernandao's brace in their 3-0 success over struggling Kayseri Erciyesspor.

Belediyespor prevailed by the same scoreline at home to Gaziantepspor, Ricardo Vaz Te matching the feats of Fernandao by scoring the first two goals.

Elsewhere, Mersin Idmanyurdu triumphed 3-1 at Balikesirspor, as did Sivasspor away to Eskisehirspor, while Jose Bosingwa's own goal earned Konyaspor a 1-0 home victory over Trabzonspor.