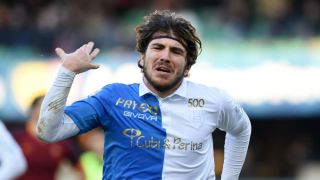 The Premier League club have slipped into relegation trouble at times this season, with a nosedive in form costing Garry Monk his job as manager in December, although consecutive wins - including a victory in Francesco Guidolin's first game in charge at Everton on Sunday - have moved the Welsh club four points from danger.

Guidolin played without a recognised striker in the game at Goodison Park, although attacking midfielder Andre Ayew scored one and won Gylfi Sigurdsson's penalty in the 2-1 win.

Paloschi, who moves to the Liberty Stadium for an undisclosed fee, has eight goals in 21 Serie A games to his name this season.

In four-and-a-half seasons at Chievo, the 26-year-old has struck 45 times in 153 outings. He has previous experience of working with Guidolin at Parma.

Swansea have also been linked with a £7million move for Dwight Gayle recently, with goals apparently top of their priorities as they look to avoid being dragged into the relegation scrap.