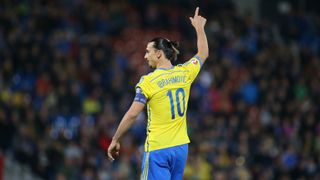 Sweden will face Denmark in an all-Scandinavian affair in the Euro 2016 play-offs.

Paris Saint-Germain star Zlatan Ibrahimovic's bid to return to major tournament football, after Sweden missed out on the 2014 World Cup, will conclude with a short trip to Denmark after Sweden play host in the first leg.

The Republic of Ireland, who secured a stunning 1-0 Group D win over world champions Germany to help them towards a play-off spot, will face Bosnia-Herzegovina.

Alongside Sweden and Bosnia, Ukraine and Hungary were the other two seeded nations in the draw at UEFA's headquarters in Nyon. They will face Slovenia and Norway respectively.

Sweden boast superiority in the head-to-head record against their near neighbours, winning 45 to Denmark's 40, though the latter have won the last four.

Ireland are seeking to qualify for their second European Championship running, having returned pointless from the 2012 tournament in Ukraine and Poland.

Hungary have not qualified since 1972, Ukraine went out in the group phase on home soil and Norway have only competed at the tournament once, while Slovenia's sole participation came in 2000.

For Bosnia it is a chance to qualify for the first time as an independent nation.