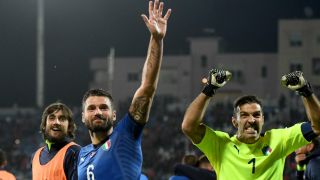 Switzerland, Italy, Croatia and Denmark will be seeded for November's World Cup qualification play-offs after the latest FIFA world rankings were published on Monday.

Eleventh placed Switzerland are the highest ranked nation in the European play-offs, with Italy (15), Croatia (18) and Denmark (19) closely behind.

The draw for the final qualifiers takes place on Tuesday and will determine the pairings of the four matches, with those ranked highest avoiding each other.

Northern Ireland (23rd), Sweden (25th), Republic of Ireland (26th) and Greece (47th) go into the draw unseeded, with the latter looking to become the first UEFA nation to reach three successive World Cups via the play-offs.

The first legs will take place between November 9 and 11, with the return matches scheduled from November 12 to 14.

Based on latest , Switzerland, Italy, Croatia Denmark to be seeded in Euro play-off drawOctober 16, 2017

Peru's securing of the play-off spot in CONMEBOL qualification has helped them move up to a record 10th in the rankings, and they will be expected to reach next year's finals when they face New Zealand in their crucial two-legged clash.

Germany remain top of the rankings, while Spain join Peru in moving into the top 10 as they climb three places to eighth.