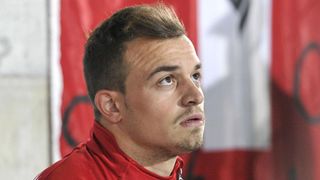 Xherdan Shaqiri is targeting Euro 2016 glory with Switzerland ahead of a tough pre-tournament friendly against Belgium on Saturday.

The Stoke City star has seen the spotlight fall on international colleague Granit Xhaka this week following confirmation of the midfielder's move from Borussia Monchengladbach to Arsenal.

Prior to potentially lighting up the Premier League next season, the former Basel team-mates will be crucial to the European Championship hopes of a Switzerland team who have not always convinced under Vladimir Petkovic, the successor as coach to Ottmar Hitzfeld.

"I'm looking forward to the Euros because I want to make some history with Switzerland," Shaqiri said ahead of this weekend's match at Stade de Geneve.

"We want a good tournament and I can't wait to play with Switzerland there."

Drawn against Romania, Albania and hosts France, Switzerland have every chance of progressing to the round of 16, but Shaqiri knows it will not be easy.

"We have a tough group, but I think we are now a good team," he added.

"We have talented players and a team with experience.

"We want to go one step forward with Switzerland and go to the next stage. When we play, nobody can stop us and I think with France we are the favourites [to progress]."

Petkovic, who omitted regular captain Gokhan Inler from his provisional squad over the midfielder's lack of playing time at Leicester City, has seen his team lose their previous two friendlies, 1-0 away to the Republic of Ireland and 2-0 at home to Bosnia-Herzegovina.

With only a last run-out against minnows Moldova to come, the clash with Belgium represents a final meaningful opportunity for Switzerland to gain some momentum ahead of their tournament opener against Euros debutants Albania in Lens on June 11.

Notching a morale-boosting victory against Belgium will be no small task, though. The Red Devils are ranked second in the world, behind only Argentina.

Although they will be without captain and centre-back Vincent Kompany, coach Marc Wilmots still has a host of talent to call on, including strikers Romelu Lukaku and Christian Benteke.

The presence of two powerful centre-forwards in the squad means Liverpool's Divock Origi is preparing himself for a role out wide, should he force his way into the team.

"I prefer to play through the middle, but if I'm here it's to be of service to the team in the position that they want to entrust to me," he said.

"I'm sometimes on the wing at Liverpool too or up front, but not on my own. But don't think this question is worrying me particularly.

"I certainly consider myself as a number nine who's capable of slipping to the wing, but ultimately it's the best who'll play and who will lead us as far as possible."

Wilmots, who is also without defender Bjorn Engels (groin), has anointed Manchester City youngster Jason Denayer as a long-term successor to Kompany and Thomas Vermaelen.

Belgium, who lost their previous friendly 2-1 to Portugal, are up against Italy, Sweden and Republic of Ireland in Group E, starting with a crunch match against the Azzurri in Lyon on June 13.