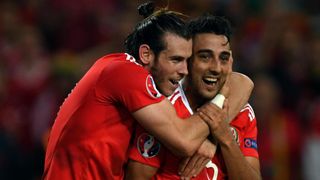 Wales defender Neil Taylor believes Portugal will think twice about celebrating not having to face Belgium in Euro 2016's semi-finals following a historic last-eight win for his side.

Radja Nainggolan's stunning strike put Belgium ahead at Stade Pierre-Mauroy, but Wales came roaring back to win 3-1 thanks to goals from Ashley Williams, Hal Robson-Kanu and Sam Vokes.

The victory has sent Chris Coleman's side into the last four of a major tournament for the first time in their history, where they will meet Portugal, who overcame Poland on penalties on Thursday.

Taylor admitted afterwards that Wales' win had left the players emotionally charged, but is confident they displayed enough quality to leave Fernando Santos' side with plenty to fear.

"It's just not sinking in, the euphoria, but when we see pictures of back home, I don't know, it could be a Bank Holiday or something. There will be a lot of people taking sick days," he said.

"It's unbelievable. Like I say: until we get back home we probably don't realise what we have done here but there is a lot of emotion in that changing room at the moment.

"It's obvious to say now that we have the belief that we can beat anybody. We have always said that. We're not lying when we say these things. And tonight I think we deserved the win, I don't think we nicked it, I don't even think it was like the game in Cardiff when we beat them 1-0 and were hanging on for long periods.

"I think here we were pretty assured and to win 3-1 I think is unbelievable. Portugal probably before the game would have thought 'I hope we get Wales and not Belgium' but hopefully looking at the game they will think differently now."

Next Wednesday's game will pit Real Madrid duo Cristiano Ronaldo and Gareth Bale head-to-head, and Taylor is looking forward to the duel.

Wales will be without Aaron Ramsey and Ben Davies for the semi-final after they picked up their second bookings of the tournament on Friday, but Taylor is determined to give them one more game at the finals.

"When we had a talk prior to the tournament, we believed that the yellows would get wiped out prior to the quarters, but we found out obviously this week that they don't," he said.

"It's so difficult not to pick up yellow cards, and in a game moving at that pace, I think they [referees] could be a bit more lenient.

"They must be disappointed but I think the emotions are there and we have already said to them 'listen, we're going to do everything to get you to the final'."