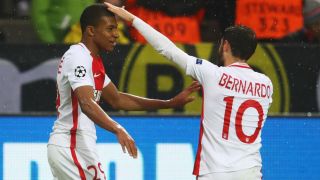 Silva moved to the Premier League in an estimated £43million transfer on Friday, leaving the Ligue 1 champions after helping them end a 17-year title drought.

Mbappe was another of the stars of a Monaco side which reached the Champions League semi-finals and he was saddened by the 22-year-old's exit.

Mbappe himself has been the subject of intense transfer speculation, with a host of Europe's top clubs linked with making a world-record move for him.

And Monaco themselves had kind words for Silva, thanking him for his service along with posting a video of some of his best moments for the club.

Silva spent a total of three seasons with Monaco, joining initially on loan and then permanently from Benfica.