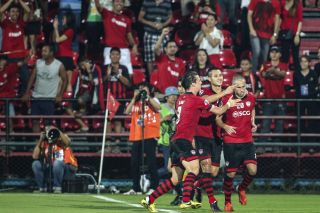 Just one point separated the two sides before kick-off, with United sitting just ahead of their opponents and level on 24 points with table-toppers BEC Tero Sasana.

United may have been without suspended former England international Jay Bothroyd, but they still exerted more control throughout the match and ultimately claimed the victory through Mario Gjurovski's 38th-minute strike after sidestepping a couple of defenders.

The victory moved United into first place due to BEC dropping points at Police United in a 1-1 draw in Saturday's late match.

BEC remain unbeaten in the Thai Premier League this season, but two consecutive draws have seen them slip two points behind United.

Suphanburi stay in touch with the top three after hammering Sisaket 5-1 away from home, leaving the hosts just a point above the drop zone.

Air Force Central picked up their first win of the season as they managed a narrow 2-1 victory at Singhtarua, but they stay fully immersed in the relegation battle, while Bangkok United and Chiangrai United played out a 0-0 stalemate.

Osotspa pushed themselves into the top half of the table thanks to a 2-1 triumph over bottom-of-the-league Samut Songkhram, which turned out to be the only win of the day on Sunday.

TOT were held to a 1-1 draw at home to Bangkok Glass and Ratchaburi also drew 1-1 at Songkhla United.