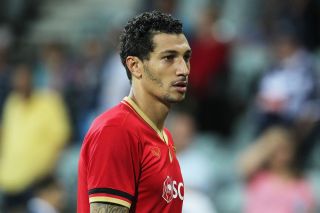 The sides' relatively low-scoring starts to the Thai Premier League season did little to suggest the clash would see goals, but a second-half flurry entertained those in attendance at the Sir Nakhon Lamduan Stadium.

Indeed Bangkok Glass led just 1-0 at half-time thanks to Goshi Okubo's opener, while Sisaket were made to play for almost an hour with 10 men when Todsapol Karnplook received his marching orders.

The away side took advantage after the break with Lazarus Kaimbi and Leesaw registering on the goal sheet and, though Pichet notched his first in the 69th-minute, it looked like being a rout when Piyachart Tamaphan made it 4-1.

However, Pichet scored twice more - either side of a red card for Bangkok Glass' Suradet Thongchai - in a late rally to ensure a nervy ending, but it proved to be too little too late for Paniphon Kertyam's men.

In other matches on Sunday, Bangkok United alleviated some early-season pressure with a 1-0 victory over Ratchaburi, but Police United lost for the sixth time this season in a 3-1 setback at TOT.

Army United were 2-0 victors over PTT Rayong, while Osotspa and BEC Tero Sasana played out a 0-0 draw.

On Saturday, leaders Muang Thong United racked up a third straight league win in a 2-1 triumph over Chiangrai United at SCG Stadium.

Singhtarua remain level on points with the leaders in second place following a 1-0 victory over reigning champions Buriram United who continued their inconsistent start to the campaign.

Elsewhere, third-placed Chonburi were held 0-0 at home by 10-man Suphanburi, Chainat were victors1-0 on home soil against Songkhla United and Samut Songkhram won by the same scoreline on their visit to Air Force Central.