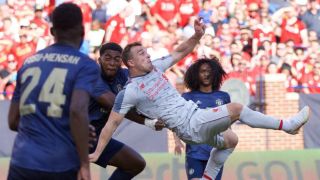 Liverpool manager Jurgen Klopp said Xherdan Shaqiri's debut was "not normal" after the new signing scored a stunning bicycle kick in the 4-1 rout of Manchester United.

Shaqiri completed the scoring in breathtaking fashion in Michigan, where Liverpool ended their International Champions Cup campaign with a resounding victory Saturday.

An off-season arrival from relegated Premier League side Stoke City, Switzerland star Shaqiri came off the bench and netted a sensational overhead kick from 12 yards after Sheyi Ojo and Daniel Sturridge put the Reds ahead.

Liverpool were pegged back by United in the first half – Sadio Mane's 28th-minute penalty cancelled out by Andreas Pereira.

Reflecting on Shaqiri's Liverpool bow, Klopp told reporters: "It was good obviously. That's not normal after four days in the club - adapting that well to the style of play.

"We wanted to help him a little bit with the position [so] that it's not too complicated, gave him a lot of freedom, offensively playing natural, plus offering runs in behind, which is what he did especially around the Sturridge goal.

"It was better than I would have expected, to be honest. I think today it was a game where it was quite easy to come in for pretty much all of them because we played over 90 minutes of really good football on a very difficult pitch for both teams. We still played simple and quick, kept them moving. That was good.

"After the [Borussia] Dortmund game, I didn't feel really good but I knew I don't have to make it bigger than it is. It's a preseason game so if you make mistakes you should lose - that's OK and if you learn from it that's OK. Today we don't make it bigger of course.

"For Shaq, in the moment he signed he wanted to stay immediately at Liverpool and train with us. I think it was a week after he finished the World Cup, so I said: 'No, no, no. Go'.

"He came back a few days ago and he was really excited. For him it was very good moment in his career, having already had a real experience at Bayern [Munich], at Stoke at Inter. Those were important moments in his career and now we have him and he can now play together with a few really nice football players."

Shaqiri is one four new signings at Liverpool following the arrivals of Alisson, Naby Keita and Fabinho, and Klopp does not plan to add any defenders before the transfer window closes.

"No, I am happy with our players, to be honest, so I don't see the need," Klopp added. "When you see Joe Gomez playing in that role tonight as a central defender, he combines a lot of things you don't find in the transfer market, to be honest. I can't see in the moment the need, but there are 12 days to go and a lot of things can happen.

"You ask me now and I say no, but maybe if you ask me tomorrow I will say something different."