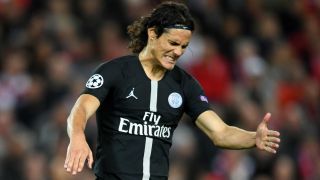 The French champions suffered a 3-2 loss at Anfield in their Group C opener on Tuesday, substitute Roberto Firmino grabbing a dramatic, late winner for the home side.

Kylian Mbappe had scored an 83rd-minute equaliser as PSG fought back from a two-goal deficit to draw level, only to concede again in stoppage time.

Cavani was off the field by the time the late drama unfolded, with Tuchel replacing the Uruguay international - who cut a frustrated figure at times in the contest - with playmaker Julian Draxler in the 80th minute.

However, ahead of Sunday's Ligue 1 clash with Rennes, the German coach has rejected reports of a fall-out and insists Cavani remains a key part of the team, both with and without the ball.

"Cavani is our best defensive player. He works all the time for the team," Tuchel told the media.

"But in Liverpool it was very hard because we defended very low. During the match, we changed the structure, but it was not because of him.

"I was not angry at him, I fully trust Cavani because he is still thinking of helping the team. That's why there is no problem with Edi."

Marco Verratti missed the game with Liverpool due to suspension but Tuchel confirmed the midfielder will feature this weekend.

The Italy international is set to start in a side that will include compatriot Gianluigi Buffon, who was also banned in Europe.

guard paid a visit to the PSGxJordan pop-up store in NYC September 21, 2018

"Kylian Mbappe is suspended. Marco Verratti feels good and will be ready to play," Tuchel added.

"Gianluigi Buffon will play in goal against Rennes and will also play against Reims [on Wednesday].

"Dani Alves and Layvin Kurzawa are absent, Alphonse Areola needs to be with his family, we will decide today if he will be in the group with us tomorrow."

While unavailable to play in midweek, Tuchel revealed why veteran goalkeeper Buffon still travelled to Merseyside with the rest of the squad.

"He is a player with a lot of experience, especially in the Champions League. He is someone who can contribute a lot to a group, and he is very important to the team," the PSG boss said.

"That's why we decided to bring him with us to Liverpool even though we knew he could not play. It's also important for him so that he can soak up the atmosphere, the group, that he is present in the locker room."