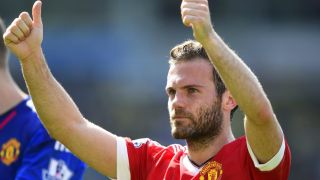 Jose Mourinho appears keen to hold on to midfielder Juan Mata, insisting there is space for the Spaniard at Manchester United.

Reports have linked Mata with a move away from Old Trafford, with fellow Premier League outfit Everton among those interested in the 28-year-old.

But Mourinho - who sold Mata to United when the pair were at Chelsea in January 2014 - says unless Mata wants to leave, he has a place in Manchester.

"He's here and he works hard," Mourinho said. "He knows that I know he is a good player and he has space in the squad.

"Until August 31 the market is open for every one of my players that is not happy, but to be fair I think he is [happy].

Mourinho also sought to clarify Mata's move to United, saying it was the player's decision - not his - to sell.

"First of all, I think maybe all of you misunderstood what happened in our previous club because I never told Mata to leave," he added. "I never pressed the club to sell him.

"It was his decision and only his decision, and I don't like players that want to leave. That's why I think every player has a price because if one day a player wants to leave it is because he does not want to be with us.

"If the player doesn't want to be with us, goodbye - be happy where you want to go. Juan at our previous club was not so happy because he was not my first choice at that time. He wanted to play every game.

"He had a fantastic offer from a big club like Man United, he wanted to leave. My previous club had a great offer, we thought that was financially very much acceptable.

"We were not with this old-fashioned idea of, 'I don't sell players to my direct competitors inside of my own country'.

"We sold him to Man United and done. Nothing else."