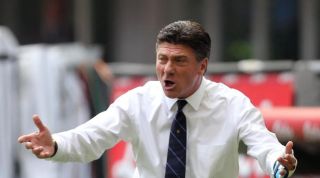 Speculation mounted over Mazzarri's future after Thohir was quoted hinting that fixtures against Sampdoria on Wednesday and Parma three days later could determine whether he stays on in the role.

Roberto Mancini has been linked with a return to San Siro, while Samp coach Sinisa Mihajlovic and former Manchester United manager David Moyes were also said to be contenders.

Thohir set the record straight on Monday, though, by insisting that he had been misinterpreted.

He said in a statement on the Serie A club's official website: "When I was in Italy on my last trip, I explained and stressed several times how much I believe in our coach and the team, in this project. I'll say it again now.

"Obviously results are important but we're not counting down games for anyone, clearly some of what I said yesterday has been misinterpreted.

"Besides, I'm very happy with yesterday's result [a 1-0 win at Cesena], the team played with heart and determination. I hope we consistently see performances like that."

Inter are eighth in Serie A after winning three of their first eight games and top UEFA Europa League Group F.