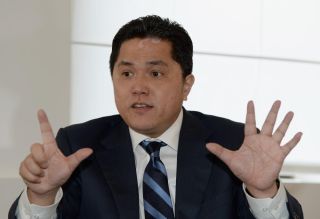 Thohir took ownership of the Serie A club in October and has overseen a number of arrivals as well as negotiations for future signings.

Manchester United captain Nemanja Vidic will arrive ahead of the 2014-15 campaign, joining January signings Hernanes and Danilo D'Ambrosio, with a host of other big names linked with a switch.

However, despite reports suggesting the likes of Fernando Torres, Edin Dzeko and Alvaro Morata could be targets, Thohir insists nothing is decided yet.

"After these three remaining games, with the sporting director and the coach we will review the entire squad, starting with the players whose contracts are due," he said.

"We are not saying that everyone will be renewed, it is necessary to assess. We will evaluate the performance of everyone.

"In June we will sign another winger and even review another forward, as currently we have only (Mauro) Icardi, (Rodrigo) Palacio and (Diego) Milito.

"It is nice to have big names, but the reality is that the negotiations are not guaranteed. I will announce the players when they are signed up, the rest is just rumours.

"It is necessary to have a complete team, to better face the next few seasons."