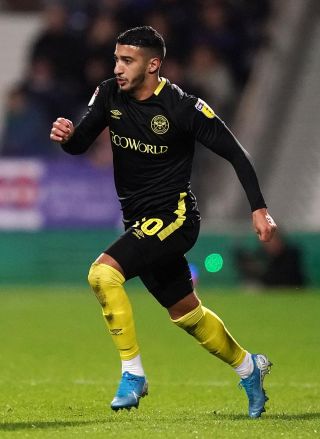 Thomas Frank highlighted Said Benrahma’s strength of character after his hat-trick inspired Brentford to a 5-1 victory at Hull.

The Algerian playmaker’s father recently died and Benrahma dedicated his memory with a t-shirt under his kit which read ‘I love you, Dad’.

Frank said: “We all know it’s very difficult when people lose a loved one. We gave him all the time off that he needed to get his head in the right place.

“It was a very nice tribute for his father. He’s had some emotional days but he said he wanted to play for his Dad and do the best he can.

“He was magnificent in his actions, his touches and of course scoring three goals. It was a fantastic performance from him.”

Having lost at home to Nottingham Forest in midweek, Frank demanded a swift response.

And his players did not let him down with an assured performance to reinvigorate their quest for promotion.

Benrahma opened the scoring after 12 minutes, while Reece Burke’s awful own-goal made it 2-0 soon afterwards.

Brentford goalkeeper David Raya incredulously gave Hull a way back into the contest when he let Ryan Tafazolli’s misdirected pass from the halfway line through his legs.

But Frank’s men never once looked like giving anything else away – especially when Ollie Watkins made in 3-1 after 58 minutes.

Benrahma later completed his hat-trick with two instinctive finishes which was no more than Brentford, and Hull, deserved.

Frank said: “It’s very nice to get a win on the board, but I really want to praise the mentality of our players in terms of bouncing back.

“That mentality to bounce back is crucial. I think that Grant McCann has done a really good job at Hull, but we produced lots of chances and showed unbelievable quality.

“It was a very good performance – especially in the final third. We had great fluidity up front and I was very pleased with our structure and discipline.

“This is a difficult place to play, and this showed a lot about our mentality.”

Hull now lost four league games on the spin and must finish the season without their two best players, Jarrod Bowen and Kamil Grosicki, who left on transfer deadline day.

McCann said: “It just felt really flat, even when we arrived at the stadium.

“We didn’t start the greatest and then got back into the game with a big bit of fortune.

“We started brightly in the second half but the game was gone once they scored a third goal.

“This is probably the first time this season we’ve been totally outclassed. We were masters of our own downfall, but Brentford were top class.

“It’s going to be a tough task to get into the top six. We were absolutely nowhere near. It was a rubbish result for us.”

On the departure of Bowen and Grosicki, McCann said: “They were both impossible to keep, especially with the contract situations.

“It was always going to have an impact but the players have got to get over themselves and move on.

“It’s about time others stepped up to the plate now. A lot of people will talk about Kamil and Jarrod, but others have got to step up and get the goals and assists.

“We’ve a young and hungry group of players, but they need to clear their minds. We have to get them right next week and look forward to the next game.”