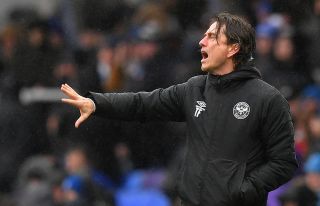 Brentford head coach Thomas Frank criticised the match officials after they failed to take action against Will Vaulks in his side’s 2-2 draw at Cardiff.

The Bluebirds midfielder escaped punishment from referee Simon Hooper after appearing to knee Christian Norgaard in the head while Brentford were 2-0 up.

Luka Racic calmly scored his first senior goal after five minutes to put the Bees ahead before Bryan Mbeumo’s free-kick doubled the lead.

Then came the flashpoint as Vaulks looked to have used his knee to push Norgaard’s head into the turf after the Brentford midfielder won the ball with a slide tackle.

Vaulks escaped punishment and went on to have a hand in goals from Junior Hoilett and Joe Ralls as Neil Harris’ side completed a first-half comeback.

“He put his knee down – he forced it down in the grass. I think there is still a hole down there,” said Frank.

“I like Neil Harris very much – we have a very good relationship and I am looking forward to having a cold beer with him. He said ‘yes it’s a red card’.

“Vaulks after the game – I said ‘you are a very good player and I know you are not a player like that’ because he is not a dirty player.

“But this one was a red card. The fourth official, linesman, too soft – they saw it 100 per cent.

“I am pleased with the attitude of my players. Coming to Cardiff – they have lost twice at home – we know it is a very difficult ground to go to.

“We totally dominate the game from the first second and on 25 minutes we are up 2-0. They don’t have a chance, then they score a very good goal. Then it gets back and forth.

“Overall I am satisfied with our performance. Of course I would have loved to win but we couldn’t today.”

Cardiff thought they should have had a penalty after Ethan Pinnock tripped Hoilett in the box, and Harris was also unhappy with the referee.

“I try and keep a calm head but the decisions tipped me over the edge,” said Harris.

“It makes you not want to work with referees and help them develop.

“It’s a clear-cut penalty and they have to get those decisions right. That’s the difference between us winning the game.

“We gave a soft goal away for the first goal and it was a great free-kick for the second.

“I thought we were a little bit standoffish and passive for the first 20 minutes, which might have been caused by the first goal.

“We found our way back into the game by forcing our way higher up the pitch, forced some turnovers and scored a really good goal with some great build up play that finished with a great cross and header from Junior Hoilett at the back post.

“Then we started to really play, we caused them problems. I’m delighted with Joe Ralls to come back after such a long time out and get the goal.”