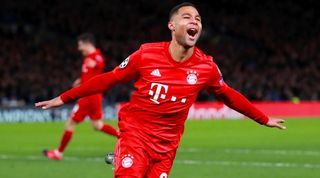 Thomas Muller is glad that Bayern Munich teammate Serge Gnabry struggled at Arsenal, otherwise he "probably wouldn't be with us now!"

Muller was speaking after Gnabry netted a brace in Bayern's 3-0 first leg Champions League last 16 victory at Chelsea. Those goals take the 24-year-old's tally in London this season to an incredible six in two appearances, having also scored four times in the 7-2 group stage win at Tottenham Hotspur.

Gnabry began his career in the city, coming through the Gunners academy but only playing 18 times in four years in the first team. That included a similarly unproductive loan spell at West Bromwich Albion, during which time manager Tony Pulis told the Express and Star the Germany international wasn't at the required level.

Gnabry returned to his home country with Werder Bremen and a year later joined Bayern. This term the forward has 17 goals and 10 assists in 30 games in all competitions. He also has 13 goals in 13 caps for Germany.

"I'm happy he is scoring so much in London now and not five years ago, because if that were the case he probably wouldn't be with us now!" Muller was quoted by Goal.

Gnabry himself added: !I certainly do (enjoy coming back to London). I have a lot of friends here. A lot of them were in the stands tonight and I think they were giving me good power."