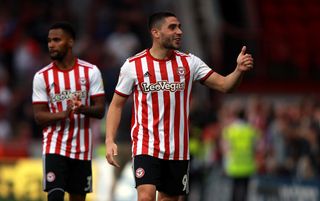 The two highest-scoring teams to have finished outside the league’s play-off places both struggled to get going on the final day of the season.

After separate stoppages in the first half to treat Bees defender Julian Jeanvier and a home fan who had collapsed, 13 minutes of stoppage time were awarded.

And Konsa took advantage by scoring the first goal of his club career, before Maupay netted his 25th Championship goal of the season nine minutes after the interval and Forss made the points safe late on.

Both sets of supporters had barely taken their seats when Jeanvier went down following a nasty collision and after a lengthy delay, he was carried off on a stretchered to a standing ovation.

It naturally took a while for both sides to get into their rhythm after that, but the deadlock could easily have been broken in comical fashion.

North End goalkeeper Connor Ripley dallied on the ball and then attempted to round Maupay, with Brentford’s top scorer almost pinching the ball off his toes.

Callum Robinson had the visitors’ opening chance after around 25 minutes when his shot was palmed by Luke Daniels, but the game only really sparked into life just before the break.

Danish midfielder Emiliano Marcondes brought the ball down well on the edge of the Preston box and turned it neatly inside for Sergi Canos, whose square pass found Konsa with the aid of a deflection for the 21-year-old to sweep home.

The second period saw Thomas Frank’s side pick up where they left off.

Josh Da Silva’s incisive through-ball found Canos in the box and the tricky Spaniard danced away from a challenge before squaring to Maupay, who planted his close-range effort into the roof of the net.

Da Silva has really come into his own this term and the 20-year-old was shining in central midfield, threading another neat pass through to Maupay who curled over.

Brentford introduced two young players late on, Forss and Jaakko Oksanen, and the former rounded off the scoring in the 84th minute with an impressive finish.

The 19-year-old shifted the ball on to his right foot and arrowed a shot into the corner from 25 yards for his first goal in league football.