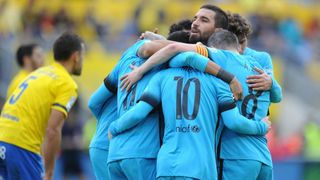 Barcelona midfielder Arda Turan insists the club's tiki-taka style of play is not as easy to implement as it looks.

The Spanish giants are renowned for their possession-based style of football, introduced in the late 1980s by Johan Cruyff, with Pep Guardiola taking it to further extremes.

Guardiola took over at Barcelona in 2008 and won 14 trophies across four seasons as he revolutionised the way the game is played.

Under current coach Luis Enrique, Barcelona have continued to play in a similar way, and Turan explained just how hard it is to continuously implement.

"From the outside, it's like chess, which looks easy to play," he said. "But just like tiki-taka, it's not.

"Everyone has a duty, a position, and everyone is fulfilling their duties.

"It's exactly like a game of chess, and it's not that easy at all."

Turan, who was officially registered to play for Barcelona in January after joining from Atletico Madrid, has his eyes set on Champions League glory with the club.

"Of course we are hungry," he said. "We have one goal, and that is to repeat last year.

"We want to win everything and so we're hungry. We want to repeat headlines again, especially in the Champions League."

However, as Barcelona prepare to face Arsenal in the last 16 of the tournament, Turan will have to watch from the stands due to a suspension picked up in his Atleti days.