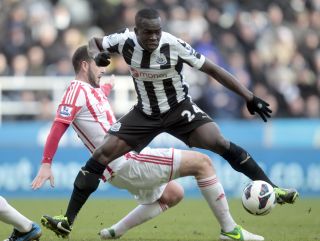 Tiote was part of the Newcastle side that finished fifth in 2011-12 and qualified for the UEFA Europa League, but Alan Pardew's side endured a miserable campaign last time out.

Newcastle ended the season in 16th, having flirted with relegation, and have only made one senior signing this close-season in the form of Loic Remy, who will miss the opening game against Manchester City.

However, Tiote insists that he and his team-mates can bounce back from last season's disappointment.

"It is almost the same group of players here as two years ago," the Ivory Coast international told The Chronicle.

"We know that we have a lot of talent and what we can do.

"We showed two years ago that we can compete for the top places in the Premier League.

"Now we are hoping that we can do that again."

Newcastle get their Premier League campaign under way on Monday against last season's runners-up and will look for revenge after losing 4-0 at the Etihad Stadium last season.

Tiote feels that while pre-season did not go as well as planned, the squad are ready for their trip to Manchester.

"We are feeling much better now," he continued. "We've worked harder than last year.

"Pre-season is behind us now. We’ve played friendly games and we've wanted to win every single one.

"We are in the right frame of mind.

"Physically we are in the best state to start the season."