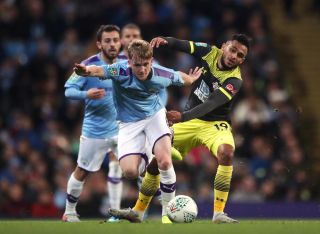 Tommy Doyle got some calming words from his grandfather Glyn Pardoe before following in his footsteps to make his Manchester City debut on Tuesday night.

The 18-year-old midfielder put in an assured performance as City advanced to the quarter-finals of the Carabao Cup with a 3-1 win over Southampton, but that is perhaps no surprise given his pedigree.

Doyle is the grandson of both Pardoe and the late Mike Doyle, team-mates in the City side that won the old First Division title in 1968, the FA Cup in 1969 and the League Cup in 1970.

A very special night for @tommydoylemcfc and his family…💙— Manchester City (@ManCity) October 29, 2019

Tuesday was an emotional moment for the family but the young Doyle took it in his stride as he kept things moving in City’s engine room despite being asked to play a largely-unfamiliar holding role.

“My mum started crying, my dad was just buzzing, and my grandad spoke to me in a calm manner,” Doyle said of the moment they learned he would play.

“He’s been there before. To play like they’ve done in the ’60s and ’70s is obviously brilliant. To continue the Doyle legacy is fantastic for me.

“Hopefully Mike was looking down proud and I’ve done everything for him as well.”

A debut at the Etihad Stadium was a special moment for the City fan, and he was grateful to his team-mates for helping him make the most of it.

“I wasn’t too (nervous),” he said. “Kyle Walker asked me if I was feeling nervous and he said ‘I’ve got your back’.

“Once he said that I was fine, I was just looking forward to it and buzzing. I couldn’t rest, I was walking around all day and then when the time came, I was ready.”

With Rodri injured and Fernandinho – deployed mostly in defence this season – suspended, Pep Guardiola turned to Doyle in order to give Ilkay Gundogan a much-needed rest.

He was one of three teenagers in the City starting XI along with Phil Foden and Eric Garcia and, having got a taste for it, Doyle is hoping to get more chances in Guardiola’s side soon.

“I want to go out there now and do it all again, but I’ll just keep knuckling down, get my head down, keep grafting and listen to every bit of information I get from the players and the staff, and then see what happens,” he said.

“I just want to keep kicking on and looking forward to the future.”

While City progressed, extending their unbeaten record in the competition to some 14 matches over three years, Southampton looked at the positives as they showed some response following Friday’s 9-0 thrashing at the hands of Leicester.

It gets no easier as they must return to the Etihad in the Premier League on Saturday, but Ralph Hasenhuttl believes his side now have something to build on after Jack Stephens’ late goal rewarded their best spell of the match.

“Happy would be the wrong word but we’re clear, discussing things, tired because we invested so much but OK,” he said of the post-match mood in the dressing room.

“It’s better than Friday I must say. But for me it’s a very new and interesting situation.

“In all the meetings we found the right tone and it’s good for the guys that they showed they want to come back on a good track and this is what we have to do.”