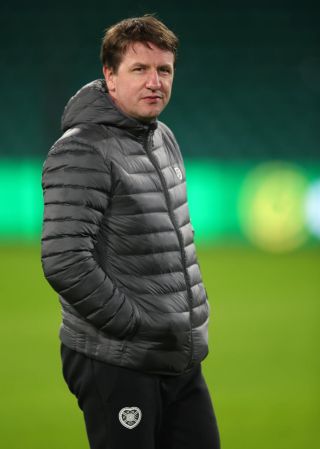 Daniel Stendel believes there is too much optimism around Hearts as the Gorgie side battle against relegation.

The Jambos fought back from 2-0 down against Hamilton at the weekend to grab a 2-2 draw but that left them without a win in four league games and kept them bottom of the Ladbrokes Premiership, one point adrift of Accies and three behind St Mirren with 11 games to play

Ahead of the league meeting with the Buddies in Paisley on Friday night, boss Stendel, who took over from Craig Levein in December,  told his players that they need a “reality check” to acknowledge the danger they are in as the season heads towards the run-in.

The former Barnsley manager said: “The atmosphere around the club and around the changing room is a little too positive for me.

“Everyone says we will stay up and we are too good to be relegated and we will win the next game then the next game. But this is not the reality at the moment.

“We have said every time in the past weeks, we need to start and improve more and everybody needs to ask what they can do to improve more.

“Every game is one game less and there is not so much time until the end of the season and everyone needs to work so much harder to achieve our goal.

“We need to fight for every game, every point and every goal we can score and defend, not just for ourselves for everyone at the club.

“We need a reality check to say, we need to do it every day.”