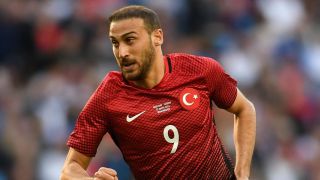 Everton manager Sam Allardyce has confirmed the club are negotiating personal terms with Cenk Tosun and could finalise the signing of the Besiktas striker before the FA Cup tie against local rivals Liverpool.

The Toffees have been urgently seeking attacking reinforcements after struggling in the absence of Romelu Lukaku, who was sold to Manchester United in July.

A slow start to the campaign saw Ronald Koeman sacked in October, to be replaced by Allardyce after a month of struggle under caretaker David Unsworth.

Despite an initial upturn in form under the ex-England manager, Everton have scored just once in their last four matches, leaving supporters desperate for Tosun's arrival to be finalised.

Questioned about the status of deal, Allardyce told a news conference: "I think it's personal terms is the final stage.

"After some long negotiation we've got to that stage now. So that might happen before the cup. Might even be getting [him] ready before the cup if we're lucky, but I think there's a medical to go through so that might be tight. Securing the player is the biggest concern."

Asked if Tosun could even feature on the bench at Anfield on Friday, Allardyce added: "Possibly. [It] depends on his overall fitness. We wouldn't want to risk damaging him, in terms of he hasn't trained for a few days. There's lots of mental energy you burn waiting for the move you want. That assessment will come from the medical or fitness staff."

The former Crystal Palace manager also identified the qualities that convinced Everton to move for the 26-year-old.

"The pedigree that he has. What he has shown, the age he is. We've not got that many players in that elite block of age in our squad.

"Hopefully he will come to the club and show he is good value for money. If we get the transfer done and he is successful for us by scoring goals it will be an exceptionally good deal for us.

"We've searched high and low for a long time at the club before I arrived. This one was one we focused on as quickly as we can.

"We're trying at the moment to cure one of the areas where we have a problem. It's a huge pressure on the lad, I hope he can live with it, we all do. There's no guarantee you can hit the ground running.