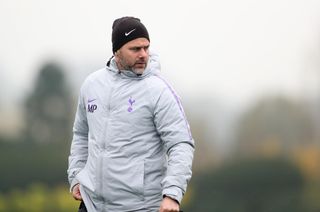 Mauricio Pochettino says Tottenham are at a crossroads and believes it will be impossible to continue overachieving in the manner they have.

Spurs are on course for a fourth-successive top-four Premier League finish and are in the semi-finals of the Champions League this season, all done against the backdrop of their £1billion stadium being built, a crippling injury list throughout the campaign and no signings in the last two transfer windows.

Pochettino previously said the completion of the club’s stadium represents the closing of a five-year chapter, but he does not know what comes next, only that it will be tough to carry on operating in the same manner.

"Now it's about delivering the job."#PL ⚪️ #COYSpic.twitter.com/z7pWwX5nLC— Tottenham Hotspur (@SpursOfficial) May 2, 2019

“I think we’re going to have time to talk,” he said. “Now we’re so focused on trying to finish the season. But if you ask me if we can repeat next season, I cannot guess.

“I said to you all that when we finish the season I think it’s a moment to close a five-year chapter, to analyse, to talk a lot and to give the real value of that period. It was amazing.

“The problem is, what do we want for the next chapter of the club? Now we’ve finished the training ground, finished the stadium.

“What does the club want to achieve in the next one, two, three, four or five years and what are the fans going to expect from the club?

“There’s many things to talk about and put on the table, and then try to be realistic.

“We cannot live like we have lived in the last five years – on the perception side and on the reality side.

“We achieved a lot of things. We overachieved maybe. I don’t know.

“Because of our ambition, the way that we work and many things we can praise, we’re here now in a very good position. But what next?”

If Pochettino had his way that would mean heavy investment in the squad as, with Harry Kane and Son Heung-min missing from Tuesday’s Champions League semi-final first leg with Ajax, he was unable to name any attacking players on the bench.

And he has called Spurs to “behave like a big club”.

“I cannot guess (what will happen) because it’s a club decision and talk,” he added. “What can we expect now?

“One question the other day was ‘the depth of the squad is not at the quality of the new stadium’ in a press conference.

“If we start next season talking about that, nothing good is going to happen in the future.

“The perception and the feeling are not going to be right. We need too much. The expectation, the reality – and then, of course, we need to give you (the media) the tools to provide our fans with the reality and find a good balance.

5️⃣ goals in his last 4️⃣ games against Bournemouth.— Tottenham Hotspur (@SpursOfficial) May 2, 2019

“We cannot tell to our fans negative things. We must always be positive.

“But sometimes if it’s too positive, we create an expectation that’s not the reality.

“And maybe I’m bored of talking about that. But that’s the reality. We need to fight for big things, behave like a big club and do things properly.”