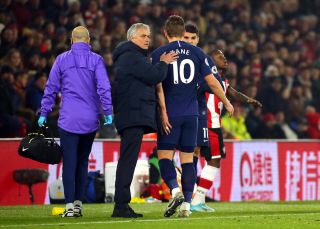 Tottenham are set to investigate the severity of Harry Kane’s hamstring injury picked up in New Year’s Day’s 1-0 defeat to Southampton amid fears he could be set for a lengthy spell on the sidelines.

Kane will most likely undergo a scan to determine the extent of the problem he sustained in the process of scoring an offside goal in the second half.

He limped off the pitch immediately and was seen leaving St Mary’s Stadium on crutches.

Head coach Jose Mourinho said straight after the match that it was too soon to know how bad the injury is, but described it as “negative”.

“For Harry to come out is negative,” he said. “Hamstring is always a negative. Is it tear? Is it a spasm? Is it a contraction? In this moment I cannot say.”

Kane’s injury will have only worsened the mood of Mourinho, who saw himself receive a yellow card from referee Mike Dean following an altercation with Saints goalkeeping coach Andrew Sparkes.

Mourinho is understood to have taken exception to some time-wasting antics and later branded Sparkes “an idiot”.

Asked about the incident after the game, Mourinho said: “I think the yellow card is fair because I was rude, but I was rude to an idiot.

“And for some reason, I was rude, but I was and because I was I deserve the yellow card.”

“I cannot tell you anything, I’m so concentrated on my game, I can only look at what I can teach my players,” he said.

“I don’t want to say anything. I have a very high opinion about this manager – he did so much for football.

“To win against his team is one thing that is interesting me today. It is not easy to play such a strong side.”