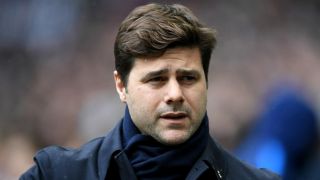 Mauricio Pochettino believes Tottenham can become a power in European football but admits they "need to build a history of winning".

Spurs were dumped out of the Champions League by Juventus on Wednesday as two quickfire goals turned a tie that had been in their control.

It marked a fourth successive season under Pochettino in which they have failed to reach the quarter-finals of a European competition, with the FA Cup their last remaining hope for silverware this term.

Despite the setback, the former Argentina international is adamant progress is being made.

"The most important thing is the club, to create a culture here. The club is [more important than] everyone," Pochettino said on Friday.

"The people that pay the tickets, the fans, are the same level ... we are in a good way to create a massive club because we have all the tools to be one of the biggest clubs in Europe.

"Last season we complained a lot about not being able to compete in the Champions League, but this year we showed in the group stage against Borussia Dortmund, Real Madrid and then Juventus that the club is ready to compete.

"I am proud because the performance was good in both games."Mauricio discusses Wednesday's disappointing defeat.March 8, 2018

"I am proud because the performance was good in both games.

"With the new facilities, the new stadium, the club will be stronger. The basis is there. Now it is to keep going and try to be clever and work hard.

"Then it is a balance. Maybe at the end of the season some players must go, others in. It is like the process at different clubs."

Tottenham will attempt to overcome their frustration in Sunday's trip to Bournemouth, for which Eric Dier is in doubt with an elbow injury.

"We are all disappointed still. Of course yesterday was worse, today is better and tomorrow will be better than today," he said.

"It is now a moment to think of the next game. The competition does not wait for you, if you are happy or sad."