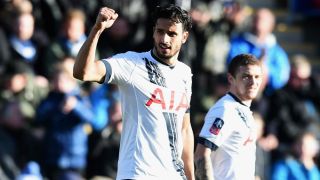 Tottenham's 4-1 victory over Colchester United on Saturday was fully deserved, according to manager Mauricio Pochettino.

The Premier League visitors dominated the early stages of the FA Cup fourth-round clash at Colchester Community Stadium and took the lead though Nacer Chadli on 27 minutes, though they spurned a number of chances to double their advantage before the break.

The League One side put in a much-improved display in the second half but a deflected Eric Dier strike and a second for Chadli settled the encounter, shortly before Tom Carroll rounded off the win after a Ben Davies own goal.

And Pochettino insisted his side were good value for their emphatic win, telling BT Sport: "I don't know if it was flattering. I think this competition is magic.

"We created a lot of chances in the first 10 or 20 minutes but it was impossible to score. Sometimes it was the keeper, sometimes our mistake or the post.

"We invited them to come and believe a little bit but it was always under control. Maybe they created some chances but it was a fair result."

Chadli, who set up Carroll's strike to cap a superb all-round display, said Colchester - who sit bottom of England's third tier - presented a sterner test than the scoreline suggests.

"They didn't make it easy for us, we had quite a lot of the ball and created a lot of chances but couldn't score," said the Belgium international. "It was not an easy game."

Spurs are into the fifth round of the FA Cup for the first time since 2012.