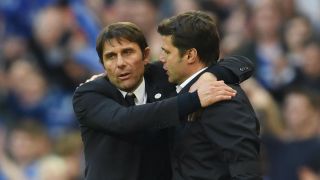 Chelsea head coach Antonio Conte believes Tottenham had an advantage over his side in this season's Premier League title race.

Mauricio Pochettino's Spurs have pushed Conte's league leaders closer than any other would-be challengers but a surprise 1-0 loss at West Ham on Friday moved Chelsea closer to glory.

If the Blues beat Middlesbrough on Monday at Stamford Bridge – a result that would relegate their opponents – and then claim three more points at West Brom four days later, they will be champions before Tottenham return to action against Manchester United next Sunday.

Chelsea have been free from the distractions of European football on account of their 10th-placed finish in 2015-16, while Spurs endured disappointment in both the Champions League and the Europa League.

But, rather than seeing this as a helpful factor, Conte believes Pochettino working for a third year with a settled squad was a preferable position to his own – inheriting a group of talented players at a low ebb.

"I must be honest about this topic. I think that Tottenham have an advantage if you compare Tottenham to Chelsea because Mauricio Pochettino is a really good manager and is working with his team for a third year," the former Juventus boss said.

"Then, I think Tottenham, in their project, have an advantage if you compare them to us. This is my first season and I found a lot of situations, a lot of players.

"Pochettino has been working there for three years and has changed a lot of players, and is working very well.

"In this season, if Chelsea had not performed in this way, Tottenham would win the title without difficulty.

"Only this great season [from Chelsea] is pushing them to fight to win or not to win the title. But, I repeat, Tottenham's position for me is more advanced if you compare Tottenham's to Chelsea."

Conte expects Spurs, who Chelsea also defeated 4-2 in the semi-finals of the FA Cup last month, to challenge again next time around, alongside anticipated improvements from Liverpool, Arsenal and the Manchester clubs.

However, the 47-year-old also envisages having a squad more attuned to his own demands after an anticipated season of transition accelerated into one of impressive achievement.

"We have had one year to work and then the possibility to go into the market and choose the right players [for] my idea of football," he said of the coming transfer window.

"For sure, we are in a moment of transition. We are losing a lot of top players who have written the story, the history, of this club.

"This season we lost [Branislav] Ivanovic, we lost [John Obi] Mikel and, next season, we'll have lost John [Terry].

"Don't forget Oscar, who went in the transfer market when we sold him."

Speculation continues that Chelsea's top scorer Diego Costa will follow Oscar's lead in pursuing greater riches in the Chinese Super League at the end of this season.

After an approach from Tianjin Quanjian briefly placed the striker and his coach at loggerheads in January, Conte is keen for the "problem" to remain on the backburner.

"Now it's very difficult to face this problem and I don't want to think about this problem," he added.

"I want to focus on the present and be prepared to face every situation and find the right solution."