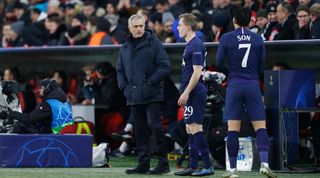 Skipp's current deal with Spurs expires in 2021 and the club are keen to tie the young midfielder down to a new one as soon as possible.

That was signed in August 2018 when the teenager was 17-years-old and FA rules stipulate it could not run for longer than three years because of his age.

However, now Skipp is 19 he is able to sign a long-term contract with the North London side.

The England Under-21 international is highly regarded at the Tottenham Hotspur Stadium and is thought of as one of the most exciting homegrown talents, alongside Troy Parrott and Japhet Tanganga.

Parrott signed a new three-year deal in February, while Tanganga is also in talks over a new contract.

Jose Mourinho is a big admirer of Skipp and his progress was one of the key reasons the Tottenham manager allowed Victor Wanyama to leave in January.