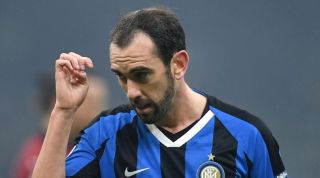 The Uruguay international joined the Nerazzurri last summer on a free transfer after a successful spell at Atletico Madrid.

But he has struggled to settle in Italy and has faced a tough fight with youngster Alessandro Bastoni for a place in Antonio Conte’s starting line-up.

The Mirror reports that Spurs boss Jose Mourinho is determined to make a move for the 34-year-old, after unsuccessfully trying to sign him during his spell at Old Trafford.

With Jan Vertonghen’s contract set to expire at the end of the season, Mourinho wants to add experience and leadership to a backline that has failed to impress this term.

But he is likely to face competition from his former employers United, who are also in the hunt for an experienced centre-back.

Additionally, Valencia could offer Godin a route back to Spain and La Liga.

This term, he has made 17 league appearances for Inter, who were in third place in the Serie A table before Italian football was suspended amid the coronavirus outbreak.

QUIZ! Can you name every city to host a World Cup final?