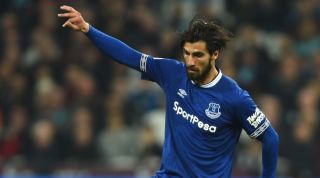 The Barcelona midfielder has impressed on loan at Goodison Park this season and the Toffees hope to make his move permanent at the end of the campaign.

However, The Telegraph believes that Spurs chairman Daniel Levy is willing to sanction a £30 million bid from White Hart Lane to pinch the player from their Premier League rivals.

The north London club have been tracking the progress of the 25-year-old since weighing up a move for him in January 2018, but could face further competition from other clubs.

Spurs’ chief scout Steve Hitchen was sent to Anfield to observe Gomes during the Merseyside derby against Liverpool in December and manager Mauricio Pochettino is said to be keen on the Portugal international, who has scored one goal in 24 league appearances this season.

When asked about his future, Gomes said: “To be honest, I try not to think about that. One thing football has given to me is teach me how to manage situations and how to enjoy it day by day.

“If I think further ahead than that then I will probably lose my mind in some way. So I'm trying to finish the season in the best way possible, give my best in every training session and in every game. We will see in the end.”

6 of the most shocking Premier League runs of form EVER