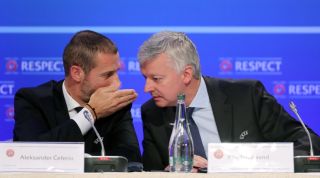 The Premier League will today discuss new proposals for major Champions League reforms that could see the introduction of relegation and promotion within Europe’s major cup competition.

It's understood that these reforms would see the Champions League group stage change from eight groups with four teams each, to four groups of eight teams. This would mean the minimum number of matches each team plays rising from six to 14.

There is also the potential for “access lists”, that would see major clubs qualify for the Champions League even if they underperform in their domestic leagues. This would mean that finishing in the Premier League’s top four, for instance, would not necessarily mean qualifying for the following season’s Champions League.

These are proposals being pushed by major figures in the European Clubs’ Association – essentially a representative body for elite European clubs. The reforms are favoured by the likes of Paris Saint-Germain and Juventus (whose chair Andrea Agnelli, also chairs thee ECA), who dominate their respective domestic leagues and want to increase income from European competition.

Today’s meeting of the Premier League’s 20 stakeholders follows a secret meeting between UEFA and representatives from elite European clubs in Switzerland last month – as FourFourTwo.com reported at the time.

MORE ON THIS STORY

The prospect of moving matches to weekends was also understood to be on the agenda at that meeting.

Yesterday, UEFA chief Aleksander Ceferin has dismissed the ideas that weekend games were ever discussed as “complete nonsense”, insisting: “We haven’t discussed weekends. Do we need that?”

This grabbed headlines, and can now be used by Ceferin to point to the fact that he has dealt with the issue of what specifically was discussed last month. The question now is – to be blunt – do we believe him?

The key here is that we know the meeting happened, and we know it wasn’t supposed to be public.

The denial that weekend games were discussed is not the interesting element of Ceferin’s comments. The interesting point was his admission that they did discuss revamping the Champions League.

“We're talking about the future of football,” he said. “I cannot go into much detail now, but there’s an idea of having more stability while at the same time more inclusion. The idea is that more clubs would play from Europe.”

That the Premier League’s stakeholders will now discuss these specific reforms suggests they take the prospect of these changes very seriously.

Ceferin’s cuddly words about “inclusion” raise questions that, of course, would surely go against the other idea he mentioned. But inclusion of who?

Extending the Champions League net to ensure that England’s top six can play in it every year could be, in a way, viewed as more “inclusive” – and could be a good way of getting the sceptical Premier League bloc onside.

All of this suggests that the row over weekend matches is a smokescreen. The way we've found out details about these discussions so far has a familiar feel. Think about how often this chain of events has happened:

This seems to have become common, particularly among certain footballing authorities. It’s simple expectation management. Are we falling for it again?