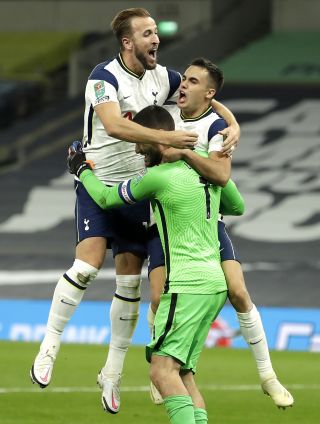 Tottenham made light of their gruelling schedule as they knocked Chelsea out of the Carabao Cup on penalties.

Spurs, in a run of four games in eight days and playing Tuesday, Thursday and Sunday this week, won the shoot-out 5-4 after the contest ended 1-1 after 90 minutes in north London.

Timo Werner scored his first Chelsea goal as Frank Lampard’s men went ahead in the first half, but Erik Lamela’s late strike sent it to spot-kicks, where Mason Mount missed the 10th penalty for the visitors.

It gives Jose Mourinho his first victory over his former midfielder as a manager after three previous defeats and also sends his side through to a quarter-final of a competition they need to win just three more games to win.

Chelsea will see this as a missed opportunity against a weakened Spurs team, but they did little in the second half having failed to build on their early lead.

Having played just 48 hours earlier against Newcastle in the league, Mourinho had written off his side’s chances of winning in his pre-match press conference because of their schedule – and playing with no recognised striker in his starting XI did little to suggest any change of thought.

Chelsea named a strong side and started the better, with Callum Hudson-Odoi having a shot saved by Hugo Lloris before Werner put them ahead in the 19th minute as he opened his Blues account.

Tottenham debutant Sergio Reguilon sloppily gave possession away and then was tricked by Cesar Azpilicueta, who pulled the ball back for Werner to clinically fire into the bottom corner.

Spurs, playing with winger Steven Bergwijn and number 10 Lamela in attack, began to improve and had two great opportunities to level.

The first fell to Gedson Fernandes, who was twice denied by a strong Kurt Zouma tackle when he was through on goal, then Edouard Mendy made the first save of his Chelsea career when he kept out Lamela’s low shot with his foot.

In between those two chances there was falling out between former allies Mourinho and Lampard on the touchline as the Portuguese was unhappy after Lampard spoke out when he was appealing against a decision.

Spurs were the better side immediately after the break and Mendy justified his £22million price tag with a brilliant save to deny Reguilon a leveller.

The hosts got in down the right and Serge Aurier pulled the ball back to the Spaniard, whose fierce first-time shot was beaten away by the Frenchman.

Aurier then curled a tame effort wide and Steven Bergwijn sliced one over as Spurs laid siege on Chelsea’s goal.

Mourinho called for Kane in the 70th minute and as Spurs chased the game, holes opened up at the other end, which should have seen Chelsea kill the game.

Werner shot straight at Lloris from a good position and then Hudson-Odoi blazed over on a two-on-one situation.

Kane had an opening as he curled over before Spurs finally got their reward with seven minutes remaining.

Toby Alderweireld’s long diagonal ball found Reguillon, whose cross was turned in by Lamela at the far post to send it to penalties.

The first nine spot-kicks were successful and then Mount clipped the post with the decisive effort, ending a run of three successive shoot-out defeats for Spurs.