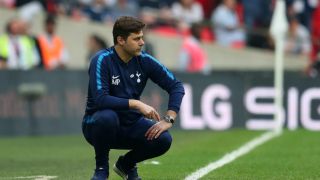 Mauricio Pochettino feels Tottenham have had an "amazing" season but acknowledges the need to do more to win silverware.

A promising Spurs campaign has tailed away in recent months, with Pochettino's men clinging on to their place in the Premier League's top four after crashing out of the FA Cup at the semi-final stage and the Champions League in the last 16.

Despite these disappointments - and a 1-0 defeat to West Brom on Saturday - the Tottenham manager remains positive and wants his side to keep getting better.

"[There has been] amazing progression," Pochettino told a pre-match news conference ahead of facing Newcastle United. "You need to compare every season in context, not out of context.

"Last season, at White Hart Lane, we played 19 games in the Premier League and we won 17 and drew twice. The team was complete, unbelievable with the fans, without the corner, remember, at White Hart Lane. We were playing fantastic, we were very confident about winning.

"After, you move to Wembley.

"You finish second in the league, you move to Wembley and of course there's a lot of fears because the Champions League wasn't great the previous season.

"If you analyse this all in context, I think it's an amazing season - to have the possibility, with two games left, to finish third, I think it's massively successful.

He continued: "If you look at the past and the history of the club, I think this group of players deserves a lot of credit - and the club, of course, for making all that situation happen.

"Of course, it's never enough in football and I always told the players, after working hard for two hours in a training session, 'Yes, well done but it's not enough, it's not enough'.

"You can see that it's not enough to have the possibility to fight for the Champions League. The people want to win, but we are the first that want to win, only we need patience to win."