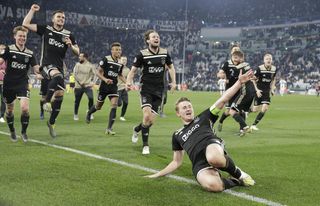 Ajax have shocked Europe this season after their run to the Champions League semi-final, where they meet also-unfancied Tottenham.

The first leg is at the Tottenham Hotspur Stadium on Tuesday with the return leg in Amsterdam next week.

Doing it the hard way

No one can say Ajax do not deserve their place in the last four of the Champions League following a campaign that started with qualifying way back in July. They finished second in their group behind Bayern Munich before being handed a gargantuan challenge in the last 16 when they were drawn against holders Real Madrid. After losing the first leg 2-1 they stunned Madrid at the Bernabeu with a 4-1 win. Juventus were waiting in the quarter-finals and – after another patchy result at home – they progressed with a 2-1 success in Turin.

Ajax have got past those two powerhouses with an attacking, high-intensity style of football that has been attractive to watch. They play with a high press and everything comes through Frenkie De Jong, while Matthijs De Ligt is considered one of the best defenders in Europe. They adopt a 4-2-3-1 formation, with Hakim Ziyech and David Neres coming in off the wings.

The downside of Ajax’s surprising run this season is that there is a very good chance their team could get ripped apart this summer, as their best players are cherry-picked by Europe’s top clubs. De Ligt is courting interest from Barcelona and Juventus while the highly-rated De Jong is also rumoured to be heading to the Nou Camp for a fee north of £70million. Their goals have come from a name familiar to fans of English football as former Southampton striker Dusan Tadic has scored 30 in 42 games in all competitions.

Ajax’s return to the top levels of European football is being heralded as a welcome return for a club who have a rich history. The won the European Cup three years in a row in the early 1970s and won the Champions League in 1994-95. That came three years after a UEFA Cup success, but since then, the Amsterdam club have had a barren time in Europe, even if they did get to the Europa League final when losing to Manchester United a few years ago.

Erik Ten Hag’s side are not only fighting for silverware on the continent, they are also embroiled in a thrilling race for the Eredivisie as they sit at the summit, level on points with PSV Eindhoven. Ajax have not won their domestic league since 2014 but only have to match Eindhoven’s results in the last two games. Their attacking prowess has again come to the fore, in an albeit weak league, as they have plundered 111 goals in 32 games.