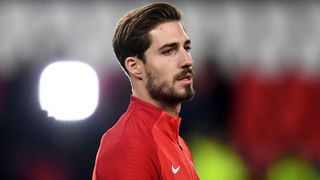 Paris Saint-Germain goalkeeper Kevin Trapp is happy to stay at the French giants for now as he continues to attract interest from the Premier League.

Liverpool have been linked with out-of-favour Trapp, who has only made two Ligue 1 appearances after falling behind Alphonse Areola.

Newcastle United are also believed to be interested in the 27-year-old Germany international, albeit via a loan deal.

However, Trapp is only focused on winning over head coach Unai Emery and playing for PSG ahead of the World Cup in Russia.

"For now, I want to stay," Trapp said following PSG's 2-0 win over 10-man Amiens in the quarter-finals of the Coupe de la Ligue.

"I am in Paris, even though I do not have enough playing time.

"There are things that cannot be changed. As soon as I play, I want to do my best. I want to show that even with this lack of playing time, I am able to play well. The goal after the season is the World Cup."

Trapp was named in the starting XI midweek as PSG reached the semi-finals of the Coupe de la Ligue, earning a meeting with Rennes.

Neymar and Adrien Rabiot were on target midweek, while axed pair Edinson Cavani and Javier Pastore were absent.

"We're very happy, because we're going to play a Coupe de la Ligue semi-final," Emery said. "We put in a serious display. We were quickly with a man over and - with patience - we worked to score the first goal.

"Little by little, the match turned in our favour. Amiens pushed, but we didn't give them many chances. So we're through to the semi-finals, and I think we deserved it, just like the other three teams still in it.

"In the next round, we'll meet Rennes again. Of course, we would have preferred to play at home, but we'll have to secure our place in the final. Before the holidays and last Sunday, we won there, so we'll go to Roazhon Park with the same goal."