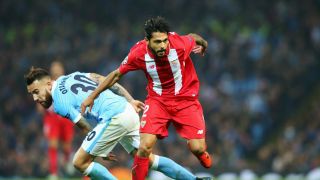 Sevilla defender Benoit Tremoulinas will miss the Europa League final against Liverpool and could sit out Euro 2016 as a result of a knee injury.

The France international suffered a meniscus tear during the 3-1 win over Shakhtar Donetsk on Thursday and faces a month on the sidelines, meaning he will play no further part in Sevilla's season.

The 30-year-old, who has only recently recovered from a thigh problem, also faces a battle to be fully fit before Didier Deschamps names his final squad for the European Championship, although he had been left out of the friendlies in March.

"Tremoulinas says goodbye to the season after suffering a tear of the lateral meniscus in his right leg," read a Sevilla statement released on Friday.

"The defender will be treated in France next week by his personal doctor, after which it is estimated he will be out for four weeks."

Sevilla also confirmed that Jose Antonio Reyes is set to resume light training after being sidelined with appendicitis.

Youngster Jose Maria Amo is expected to be out until next year, however, after surgery on a torn knee ligament.