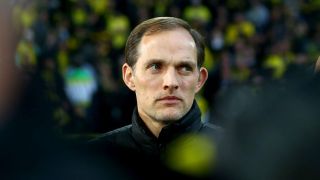 Thomas Tuchel has cast doubt on his Borussia Dortmund future and said events of this week mean it would be "naive" to keep going as things are.

Dortmund CEO Hans-Joachim Watzke recently confirmed the pair fell out over the rescheduling of the Champions League tie with Monaco 24 hours after the club's team bus was the target of a bomb attack, while quotes surfaced this week purportedly from an unnamed player questioning Tuchel's approach.

The former Mainz boss insisted all focus remained on the bid to finish third in the Bundesliga and secure an automatic place in the Champions League group stage next season, but hinted he should no longer be considered a shoo-in to be in charge come August.

Speaking ahead of Saturday's trip to Augsburg, Tuchel told reporters: "I am the wrong person to talk to about this. It would be naive from me, after a week like this, to say 'we'll keep going as things are'.

"I feel strong enough to put this aside and feel compelled to concentrate on the sport.

"If you had asked me a few weeks ago, I would have told you: 'I'm quite sure that I will be the coach here next season.'

"There have been so many untruths and false quotes this week which dramatically overstepped the mark for me.

"It is really hard to handle all of this, personally, but…and this is a big but, at this moment I feel the strength and the trust towards me and towards the sporting targets we have together to make a great season and put my personal needs and feelings aside, as hard as it is for me."

Asked if he and Watzke had cleared the air in recent days, he replied: "There was no clarifying conversation with Watzke. It's not about sporting success. A lot was turned on its head this week."

Tuchel has 12 months left on his contract and would attract plenty of attention should he leave Signal Iduna Park at the end of the season after two years in charge.

Talks over a new deal had been scheduled for the summer but Tuchel hinted both he and the club need to consider their positions before sitting down.

He added: "A contract extension is not a certificate or a medal you simply get hung around your neck.

"There are conversations at eye-level and agreements to keep working together.

"I am an employee and I do everything I can to achieve the goals we have.

"For everything else, we need a little patience and a little distance."