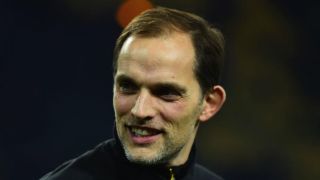 Borussia Dortmund coach Thomas Tuchel is keen to bring in some fresh blood in the January transfer window following the departures of Adnan Januzaj and Jonas Hofmann earlier this month.

Januzaj prematurely returned to Manchester United after an unsuccessful loan spell, while Hofmann opted to leave for Borussia Monchengladbach.

And Tuchel is hopeful Dortmund will succeed in signing a new attacker this month, even if he realises it will not be an easy task.

"We are keeping our eyes open for any opportunities. I still expect something to happen," Tuchel told Sport Bild.

"We have a pretty small group of players at the moment. I generally like that, but we lost two players in attack this month. That's why we are looking into signing someone in attack.

"Even if it is by no means easy to find a suitable option. It is a tough task."

Tuchel was given some good news on Thursday when top scorer Pierre-Emerick Aubameyang ruled out a January transfer, but the BVB coach was not surprised by the Gabon international's announcement.

"Aubameyang? I could have told you that he was not going anywhere as well," he said.