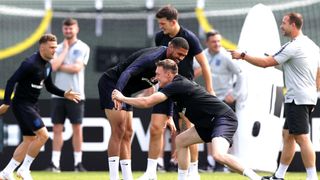 Phil Jones believes Gareth Southgate's England are enjoying a fresh approach ahead of their World Cup opener against Tunisia.

The Three Lions face their Group G rivals in Volgograd on Monday, 20 years on from the sides' meeting in Marseille that began their respective France 98 campaigns.

Southgate, along with Tony Adams and Sol Campbell, formed part of a three-man central defence that day as goals from Alan Shearer and Paul Scholes secured a 2-0 victory, and two decades later England's manager looks set to deploy a similar shape.

It seems unlikely Jones will earn a starting spot against Tunisia but the Manchester United defender - a survivor from England's desperate disappointment of the 2014 World Cup in Brazil - believes the squad are in a much better place under Southgate's stewardship.

"I feel there is more structure, everyone knows their jobs, their roles and what is expected of each other," he said.

"Not just on the pitch but off the pitch. It works. I guess there is a clearer identity.

"I am not saying there was not previously but there is a different dimension and different way of doing things in certain situations. The lads have responded well."

Today’s our last full day in Repino before we travel across to Volgograd tomorrow. days to go...16 June 2018

England were handed a boost on Friday when Marcus Rashford returned to training following a minor knee injury and the United forward is widely expected to be in competition with Raheem Sterling for a place in the starting XI.

Tunisia's final warm-up fixture ended in a 1-0 defeat to Spain, a match which saw first-choice left-back Ali Maaloul limp off with a hamstring problem.

Wahbi Khazri sat out all three of Tunisia's pre-World Cup friendlies due to a thigh complaint but the Sunderland man, who spent 2017-18 on loan at Rennes, is ready and raring to face England.

"I feel pretty good – I'm happy to go back to work and play. We are aware that we have a really tough group," he told Sunderland's official website.

"We know that the favourites to advance to the second round are Belgium and England, but we have a good team which plays well together. Let's fight for it."

Despite his pre-tournament fitness concerns, Khazri is likely to prove the catalyst should Tunisia enjoy any success in Russia. In 24 Ligue 1 outings for Rennes, Khazri contributed an impressive nine goals. He is no stranger to referees, however, also picking up eight cautions and one red during that time.

Can England's captain transmit his stunning Premier League form to the grandest stage? After 105 goals across the last four Premier League campaigns, Kane has established himself as arguably the best out-and-out striker in Europe. With a heavy Tottenham contingent likely to make up Southgate's starting XI, Kane should feel right at home.

- England have won only one of their last eight games at the World Cup (D4 L3), a 1-0 victory over Slovenia in June 2010. They have also never scored more than one goal in their last nine games at the tournament.

- Eleven of England's 62 games at the World Cup have ended goalless, more than any other team in the history of the tournament.

- England had the joint-best defensive record in the 2018 UEFA World Cup qualifiers alongside Spain, conceding three goals in 10 games. They were also one of four unbeaten teams, alongside Belgium, Germany and Spain.