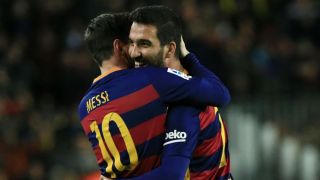 Turan, who joined Barcelona from Atletico Madrid during the close season when the club were barred from registering new players under FIFA transfer sanctions, made his long-awaited Liga debut in Saturday's 4-0 win over Granada.

Messi typically took centre stage with a hat-trick, although Turan had a hand in his heroics – crossing for the eighth-minute opener and cleverly dummying a pass to Neymar in the build-up to the Argentinian's third.

On Monday, Messi is favourite to collect the fifth Ballon d'Or of his career in Zurich and Turan told Turkish newspaper Sabah: "I have never seen anyone like Leo Messi.

"He is a miracle from God. I like it when he does his things on the field.

"It's not jealousy - I feel good, for instance, when he nutmegs someone."

Having spent the first half of this season as an enforced spectator, Turan is keen to repay the faith shown in him by Barca coach Luis Enrique.

"Luis Enrique wanted me at Barcelona because of my ability to hold on to the ball, my desire for winning and hard work," he said.

"He told me that these are the reasons he wanted me for. I will show everyone on the pitch why he wanted me at this team."

Turan was a key member of the Atletico side that memorably pipped Barca and Real Madrid to the Liga title in 2013-14.

An injury sustained during the title-clinching final-day draw at Barcelona meant Turan was forced to watch on for a defeat that still rankles with him.

"My only regret is not winning the Champions League when we were so close in 2014," he said.

"We were only a minute and twenty seconds away from it. I tried so hard to be able to play in that final but I couldn't despite all the injections and treatments."