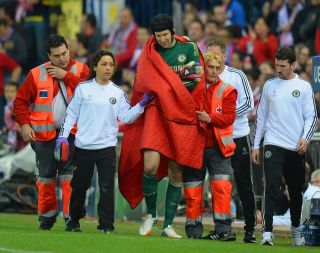 Captain John Terry and goalkeeper Petr Cech were both withdrawn through injury, while midfield duo Frank Lampard and John Obi Mikel will miss the return encounter through suspension, along with Atletico skipper Gabi, after picking up yellow cards on Tuesday.

Goalmouth action was scarce in a tight affair at Vicente Calderon, with Chelsea seemingly content to drop deep and escape the Spanish capital with a clean sheet.

Much of Atletico's success under Diego Simeone has been built on lethal counter-attacking play, but Chelsea's game plan forced the Liga leaders to take the initiative and the hosts were unable to break down a stubborn visiting backline well marshalled by Terry, who left the field in the 73rd minute after twisting his left ankle.

Cech had already gone off in the first half, while Lampard, Mikel and Gabi were all booked in quick succession as tempers frayed slightly.

Much was made of the availability of Atletico goalkeeper Thibaut Courtois against his parent club and Fernando Torres returning to his old stomping ground, but neither player was heavily involved as Chelsea stuck rigidly to frustrating their opponents.

After a quiet opening, Chelsea were dealt a blow in the 18th minute when Cech had to be replaced by Mark Schwarzer after landing on his right arm in a challenge with Raul Garcia.

Ramires wasted a rare opening for the visitors 10 minutes later, flashing a cross-shot across goal with Torres in support after Willian had led a counter attack.

Garcia headed a half-chance over the crossbar before Mario Suarez curled a 25-yard effort narrowly wide of the right-hand upright 11 minutes before half-time.

Cesar Azpilicueta had to be alert in the 41st minute, throwing himself in front of Diego Costa's well-struck volley as Atletico continued to make most of the running.

Lampard fizzed a left-footed volley straight at Courtois in the opening exchanges of the second half before Diego shot straight at Schwarzer after an unconvincing punch from the Australian.

Following Terry's withdrawal, Gabi saw a free-kick well held by Schwarzer low down to his left in the 76th minute and substitute Arda Turan headed wide at the back post shortly afterwards.

Atletico continued to press in the final stages, Costa heading straight at Schwarzer with their final chance in stoppage time and the two sides will return to London next week with the tie finely poised.