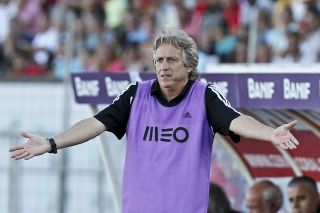 For Benfica’s Estadio da Luz this match represents the beginning of a noteworthy season as the 65,000-capacity arena is set to stage the competition's final in May 2014.

However, despite being among the seeded teams, Jorge Jesus' team would be surprising finalists.

The Portuguese side lost the domestic title to FC Porto in the final two matches of last season and responded by bringing in a host of new players, notably Filip Djuricic from Heerenveen, Partizan Belgrade's highly-rated Serbian teenager Lazar Markovic and reported Real Madrid target Guilherme Siqueira, who joined on loan from Spanish side Granada.

Jesus' side did not enjoy an emphatic start to the campaign as they were defeated away to Maritimo, thus extending their run without a win on the opening day of the campaign to nine years, but when they looked set to lose again in week two, Markovic and Lima earned three points against Gil Vicente.

Benfica's opponents on Tuesday, Anderlecht, have played 180 matches in Europe's premier club competition but their more recent history leaves a lot to be desired, with last season’s participation representing their first appearance in the group stage since the 2006-07 season.

The Belgian side could not muster a great deal upon their return as they scored just four goals, the second-lowest tally in the competition behind Dinamo Zagreb. Anderlecht did, however, manage their first Champions League home win in nine years when defeating Zenit St Petersburg 1-0.

Manager John van den Brom will have been disappointed to lose key men Dieumerci Mbokani and Lucas Biglia, to Dynamo Kiev and Lazio respectively, over the close-season, but they made several astute signings too.

Nineteen-year-old Ghana winger Frank Acheampong arrived from Buriram United, while a real coup came in the acquisition of Spain Under-20 wideman Fede Vico from Cordoba.