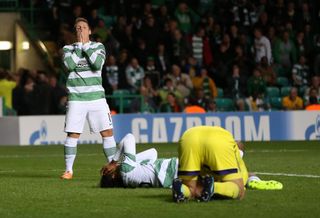 The sides were level at 1-1 from last week's play-off first leg in Slovenia, but Marcos Tavares scored the only goal at Celtic Park to dump the Scottish champions out of the competition.

The Brazilian swung his right leg at a loose ball in the Celtic area after the home side failed to clear their lines in the 75th minute, sending it looping over goalkeeper Craig Gordon to break the hearts of all in green and white.

It is, of course, the second time this season that Celtic have had to deal with Champions League elimination.

Celtic's progression from the last round was only assured after Legia Warsaw were penalised for fielding an ineligible player in the second leg of their third qualifying round tie.

However, Celtic, who originally lost 6-1 on aggregate to the Polish outfit, were ultimately unable to make the most of their reprieve.

Qualification was far more straightforward in the remainder of the evening's matches.

Porto - already one up from the first leg of their clash with Lille - picked up a 2-0 victory over their French opponents on home soil to book a place in the group stage.

Yacine Brahimi got the ball rolling with a superb curling free-kick from 25 yards before Jackson Martinez breached the Lille defence to drill a low effort beyond goalkeeper Vincent Enyeama.

Hulk netted a brace as Zenit beat Standard Liege 3-0 to seal a 4-0 success on aggregate, in a match that saw both sides end with 10 men.

Salomon Rondon opened the scoring with a simple header after Eiji Kawashima had parried into his path before Viktor Faizulin saw red for a second bookable offence.

Despite being a man down, Zenit extended their lead when Hulk scored his first from the penalty spot after Igor Smolnikov was felled by Jelle Van Damme.

His second was a sensational solo effort. After picking up the ball in his own half, Hulk powered his way through the Standard half and buried his shot in the bottom left-hand corner of the net.

Ricardo Faty's red card in the closing stages rubbed salt in the wound for Standard.

Two goals in each half saw APOEL comfortably make their way into the group stage in a 5-1 aggregate victory over Aab - Cillian Sheridan scoring the pick of the bunch in the 75th minute.

In the day's remaining fixture, BATE put three past Slovan Bratislava as they claimed a 4-1 win over the two legs.

Mikhail Gordeychuk, Sergey Krivets and Vitali Rodionov notched, with each of their efforts coming from a central area in the penalty box, raising question marks about the quality of the visitors' defending.