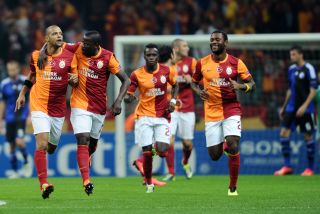 First-half goals from Felipe Melo, Wesley Sneijder and Didier Drogba handed Roberto Mancini his first victory in Europe with the Turkish side, despite Claudemir's late strike

It keeps them in with a shout of qualifying from Group B - which is led by Real Madrid and also includes Juventus - while their Danish opponents are rock-bottom with one point from three matches.

Galatasaray manager Mancini opted to make three changes from the 2-1 Super Lig win over Karabukspor last Saturday, with a double switch-up at the back seeing Dany Nounkeu and Emmanuel Eboue drafted in.

There was also a return to the starting line-up for 18-year-old striker Bruma, who was preferred to his more senior counterpart Ceyhun Gulselam for the encounter.

There were two changes for Copenhagen boss Stale Solbakken following the 3-0 league win over AAB, Pierre Bengtsson coming in for Christoffer Remmer, and Daniel Braaten also given the nod in a more experienced line-up.

It was the home side that were quickly on top, though, with Melo putting his men ahead after just nine minutes, heading home a stunning cross from Nounkeu that left goalkeeper Johan Wiland with little chance.

The strong start clearly fired Mancini's men up as Drogba went close to doubling the tally just minutes later, but after holding off Ragnar Sigurdsson well he saw his shot blocked by Wiland.

Sneijder who was on hand to fire home the second in the 38th minute, though, converting from the edge of the box after collecting a pass from Eboue.

And Galatasaray practically wrapped up the points on the stroke of half-time when Drogba added the third from inside the area.

It was little surprise that Solbakken changed things around at half-time, adding Christian Bolanos and Fanendo Adi to the mix and it looked to have paid off soon after as Nicolai Jorgensen flicked in a fine ball, only to see Aurelien Chedjou cut it out.

They were almost made to rue the missed opportunity in the 66th minute when Burak Yilmaz went one on one with Wiland, but having beaten the 32-year-old, he poked the ball just wide.

The visitors did manage to get their consolation with four minutes left, but Claudemir's measured finish past Fernando Muslera was too little, too late.