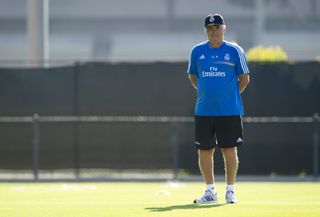 The Spanish side were dumped out of the UEFA Champions League by Borussia Dortmund in the semi-finals last season after the Germans opened up a stunning 4-1 first-leg lead on home soil.

Jose Mourinho has since departed Santiago Bernabeu, his place taken by the experienced Carlo Ancelotti, a winner of Europe's premier club competition on two occasions as a manager with AC Milan in 2003 and 2007 and twice as a player with the San Siro club in 1989 and 1990.

There have also been new arrivals on the field, the likes of Isco, Asier Illarramendi and world-record signing Gareth Bale bringing additional star quality to a squad headlined by Cristiano Ronaldo.

For all their talent, Real will have to cope without Xabi Alonso, who is set to miss much of the remainder of the year with a broken bone in his right foot.

However, club icon Iker Casillas will play his first competitive match for the club in almost 250 days after losing his starting place to Diego Lopez, a January signing from Sevilla.

With Real's goalkeeping situation the subject of much debate ever since Casillas' return to fitness in March, Ancelotti confirmed the 32-year-old will return this week.

"The decision is taken for Casillas to play on Tuesday. Iker knows, Diego knows. There is no problem," said the Italian.

Galatasaray ended their 12-match winless streak against Spanish opposition when they played Real in the quarter-finals last season, recording a 3-2 home victory that ultimately proved in vain as Mourinho's men progressed 5-3 on aggregate.

With Ronaldo on a run of 21 goals in his previous 19 Champions League matches, the Turkish side face a tough challenge in securing a repeat success.

Yet Galatasaray do boast a fine recent record in Istanbul, losing only two of their last 14 home European matches.