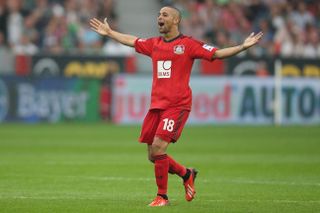 Leverkusen have won their last seven fixtures at the BayArena in the group stages of Europe's premier club competition and manager Sami Hyypia will be hopeful of extending that against their Ukrainian opponents.

The German side have made their best ever start to a Bundesliga season, posting seven wins in nine matches - form that sees them sitting third in the table, just a point behind leaders Bayern Munich.

Their latest win was shrouded in controversy though, with Stefan Kiessling awarded a goal for a header that ended up in the net via the side netting in their 2-1 win at Hoffenheim on Friday.

Although Hoffenheim have called for a replay, that appears unlikely, despite Hyypia offering his apologies afterwards.

"Obviously it feels a little uncomfortable winning like that. I can't do anything about it (though). It's the referee who makes the decisions," Hyypia said.

The furore surrounding Kiessling's goal took the attention away from Leverkusen winger Sidney Sam, who capped another excellent performance with a goal.

Sam has scored 10 in 14 appearances this season, with seven coming in the Bundesliga, and his form has helped Kiessling, who had been expected to shoulder the bulk of the scoring duties this season.

Lars Bender (thigh) is still an injury worry for Leverkusen, but South Korea winger Son Heung-Min will be raring to go after he was an unused substitute at Hoffenheim.

Shakhtar top Group A with four points from their two matches and they will enter the match on the back of a seven-match unbeaten run in all competitions.

Shakhtar have scored 10 goals in their last two Ukraine Premier League fixtures, with Argentine forward Facundo Ferreya scoring a hat-trick in their 7-0 demolition of Arsenal Kiev earlier this month.

They sit second in the league – a crown they have won seven times in the last 10 years – and have progressed through the group stages of the Champions League in the last two seasons.

Despite losing the likes of Fernandinho, Henrikh Mkhitaryan and Willian in the close-season, Brazilian trio Luiz Adriano, Alex Teixeira and Douglas Costa have continued to perform for manager Mircea Lucescu.

New signings Fred and Bernard – who arrived from the Brazilian Serie A for a combined fee of more than £35 million – have settled well and after snaring a point against Manchester United in their last Champions League fixture, Shakhtar will be confident of ending Leverkusen's superb home record.