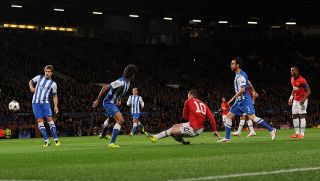 Coming into the match on the back of one point from two Premier League home games against West Brom and Southampton, United turned in a largely impressive performance - with the exception of a nervy period after half-time - to retain top spot in Group A.

A spell of uncertainty at the back from the hosts was nothing compared to the defensive horror show with which Sociedad opened the contest, ultimately ensuring a third successive defeat of the group stage.

The decisive moment came in the second minute via Inigo Martinez's own goal after the impressive Wayne Rooney had struck the post.

The big news before kick-off was United resting star striker Robin van Persie due to niggling toe and groin complaints and his absence from the squad meant a start for Javier Hernandez alongside the recalled Ryan Giggs and Shinji Kagawa.

Experienced midfielder Xabi Prieto earned his first Sociedad start for a month at the expense of Ruben Pardo.

Any tension around Old Trafford was blown away when Martinez put through his own goal to lauch a frantic opening period.

Patrice Evra tenaciously won possession on the left flank before Rooney bamboozled Sociedad's defence and unleashed a fierce strike against the upright.  Martinez made the worst possible job of attempting to clear, instead diverting the ball home.

They came closer still in the 42nd minute when Griezmann's 25-yard free-kick cannoned back off the underside of the crossbar.

The visitors displayed plenty of intent after the break and when a bout of penalty box pinball almost resulted in Jonny Evans putting through his own goal, the game's defensive anxiety had clearly shifted.

Phil Jones powered an unmarked header from another well-worked short corner to draw a sharp stop from Bravo but, in an increasingly stretched contest, De Gea's crossbar came to his rescue when Sociedad full-back De la Bella skewed a left-wing cross just before the hour.

It was United’s turn to test the Old Trafford furniture in the 64th minute as Rooney's delightful pass released Valencia down the right channel and he drilled against the base of the far post.

Kagawa saw his follow-up blocked and the ex-Borussia Dortmund player was then denied by a last-ditch tackle from Carlos Martinez having errantly chosen not to strike first time.

Valencia returned the favour to Rooney in the 71st minute with a flick-on that his team-mate blasted over.

Substitute Ashley Young and Rooney passed up late opportunities to add gloss to the scoreline as United all but ended Sociedad's qualification hopes.