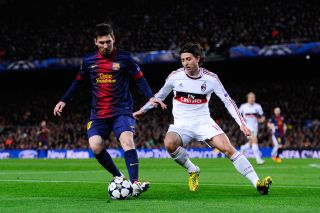 The sides faced each other in the round of 16 last season, with Barcelona overturning a 2-0 first-leg deficit to win 4-0 at Camp Nou on their way to the semi-finals.

That win for Milan in the opening fixture was their first over the Liga giants since October 2004, a run of seven fixtures.

Both clubs enjoy a storied past in Europe's premier club competition, meeting in the 1994 final when Johan Cruyff's 'Dream Team' were comprehensively dismantled by Fabio Capello's organised outfit 4-0.

Mario Balotelli is expected to miss the clash due to a thigh injury, while Marco Amelia will make his first appearance since April in goal, with Christian Abbiati (calf) injured and Gabriel, who played in Saturday's 1-0 win over Udinese, unregistered.

Manager Massimiliano Allegri bemoaned the number of players unavailable to him, but is regardless targeting a vital win against Gerardo Martino's side.

He said: "We're still waiting to get players back namely Pazzini, Bonera, De Sciglio and Balotelli.

"It'll be tough against Barcelona but we have the right requirements to do well.

"There are three points available on Tuesday and they'll be important to get out of the group."

Barcelona failed to win for the first time under their new manager on Saturday as they drew 0-0 with Osasuna, the first time in 64 Liga fixtures they have drawn a blank.

Martino has an almost full squad to choose from, with only Jordi Alba and Ibrahim Afellay (both thigh) unavailable due to injury.

Carles Puyol is likely to continue at centre-back, having made his first appearance since last season's 4-0 win over Milan at Osasuna on Saturday.

One man particularly keen to have a good game will be German referee Felix Brych, who will enter the contest having made headlines for all the wrong reasons in the Bundesliga on Friday as he awarded Bayer Leverkusen striker Stefan Kiessling a goal, despite the ball clearly passing through a hole in the side-netting on its way in.